When we first saw the Pyrenees a few days ago, I posted a picture on Facebook which has elicited many positive reactions which hearten us. One that we especially appreciate was from “Freekje”, Freek van Ooteghem, the first pilgrim we ever ran into back in 2015. He finished the camino that very year and has gone on to trek around half the world but he stopped to wish us well! 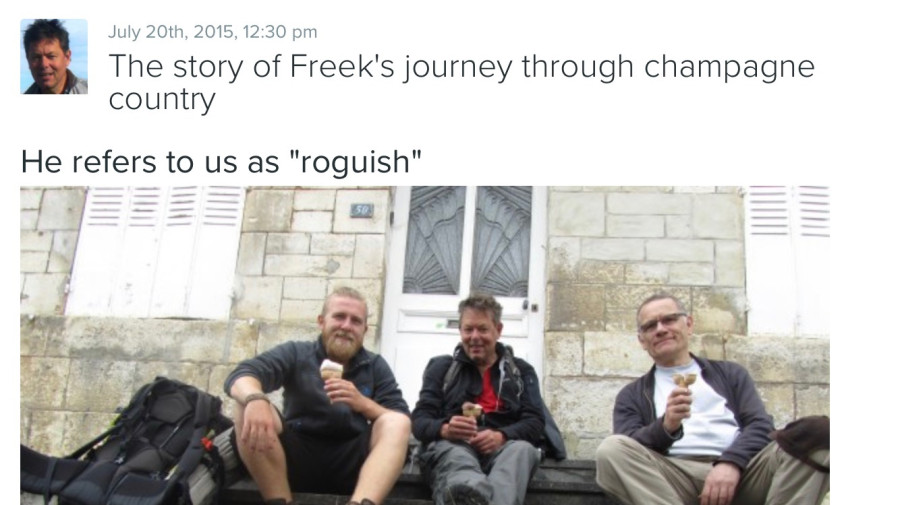 Another thing that has happened is that I have gotten us into a muddle with the transfer of baggage from St Jean Pied de Port on. I have often complained that our camino is too organized, everything is booked months in advance usually. This time we waited with booking the transfer of baggage in Spain until it was clear that we would make it. In any case, a combination of two companies providing the service, one eager, one more well-known but slower to respond, my impatience, a number of red crosses next to our destinations on the website, a credit card that appears to be blocked, have led to some confusion. We finally got it sorted out, when this morning the party we chose calmly informs us that the price is 300€ instead of the customary 42€ because it is off-season. We’re back to where we started...

The third development today is that the taxi that is driving us back to Sauveterre-de-Béarn this morning will be going on farther with our luggage. We decide to have him drop us off 12 km past Sauveterre, where we stopped yesterday. As we gaily wave him on past the struggling fellow pilgrims on the road, we think of the wisdom of the Woman of the Woods. “The camino gives you what you need!”
For two diligent, dutiful, methodical, disciplined Tauruses (triple-Taurus, in my case) to do something so frivolous and cheerfully irresponsible is a victory over ourselves, a gift from the camino!

We start off from Saint Palais now. We are in French Basque country. The houses are white with red trim, the signs are in French and Basque.
The landscape has changed as well, we’re in the foothills. Finally out of the cornfields; there’s cows here, with cowbells, and sheep.
It’s sunny. We climb up some very non-pilgrim paths (unnecessary climbs) and are rewarded with fantastic views. 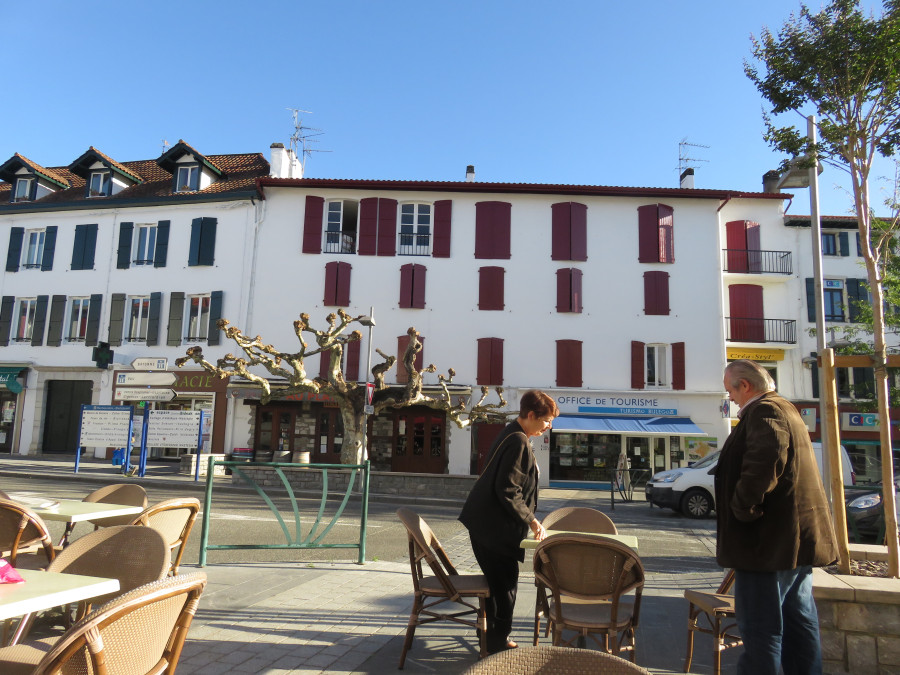 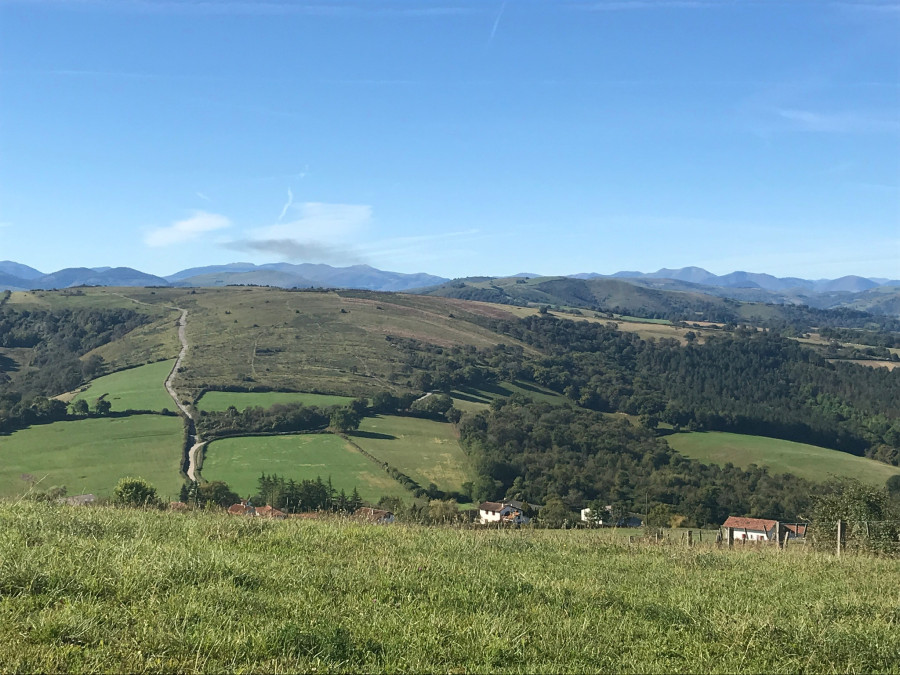 We meet lots of other pilgrims as three of The French routes came together at Saint Palais and continue on together to the Pass of Roncesvalles...

We have to deal with all these other people on our path. I am quite impressed by a young man who comes up to us, says “it is harsh, but I think I will make it!” without stopping, without bothering with all the Bonjours, Bonne Routes etc. He keeps walking. This is what I’m going to do, I decide. I really can’t stop to chat with every tired pilgrim I come across...
Desmond disagrees. He thinks the young man is just plain rude. Because we cut off half our walk, we have a wonderful, relaxing day. Only 12 km. We arrive in Ostabat early in the afternoon and have beer and a paté sandwich with other pilgrims in the shade of a big tree. Des chats with a fellow pilgrim about the Cunard ships. Des came over on the Queen Mary II and can compare experiences with this man who has been on over 40 Cunard trips.
At the table next to us, two Flemish gentleman are trying to arrange a place to sleep for the night. They keep getting answering machines and I decide that I will no longer complain about arranging things in advance. A few rest days would be nice next time, though.
We talk to the gentlemen and find out they’re 76 and 80 years old, and carrying their own backpacks.

I call to be picked up as per the instructions of Caminoway. The lady says “a toute a l’heure!”.
After about an hour I call again. She’s surprised that we want to be picked up and hands me over to her boss who’s annoyed and says he’ll be there and just hangs up.
It turns out to be a mistake by Caminoway, the only one on this excellently organized trip.
The hotel is four km down the road and on the route. We could easily have walked, the angry hotel owner tells us. He’s right, but how could we know that?

We leave in the rain. Our hotel owner doesn’t offer to drive us back to Ostabat to pick up the walk where we left off and we’re fine with that. We’re happy to have a little less far to go today. We move quickly despite the rain. Perhaps it’s the presence of so many other pilgrims on the road, many of whom walk faster than we do.
We’re definitely all heading towards the jump off point for the crossing of the Pyrenees, one feels, though it’s hard to tell yet in which valley we’ll end up. 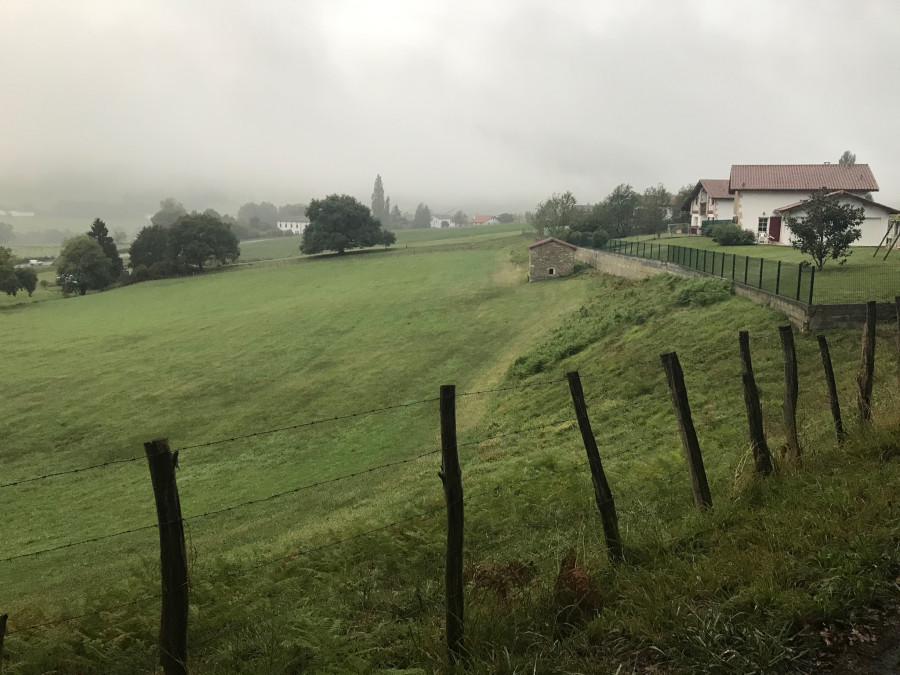 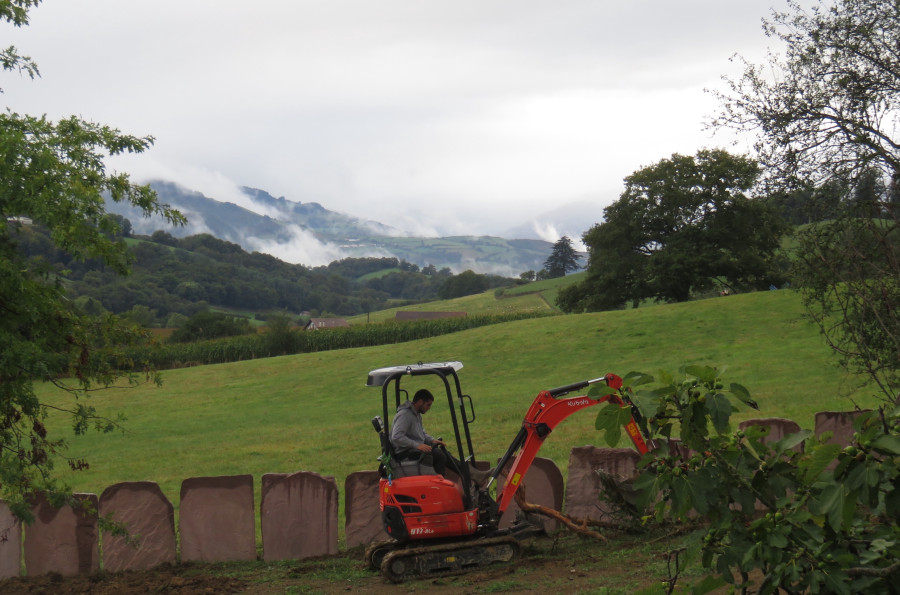 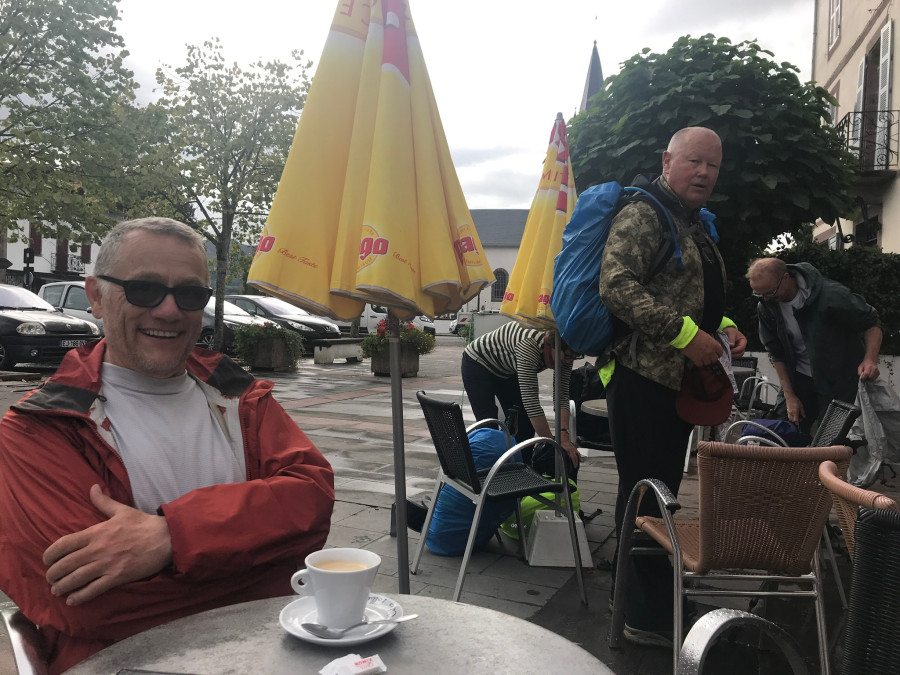 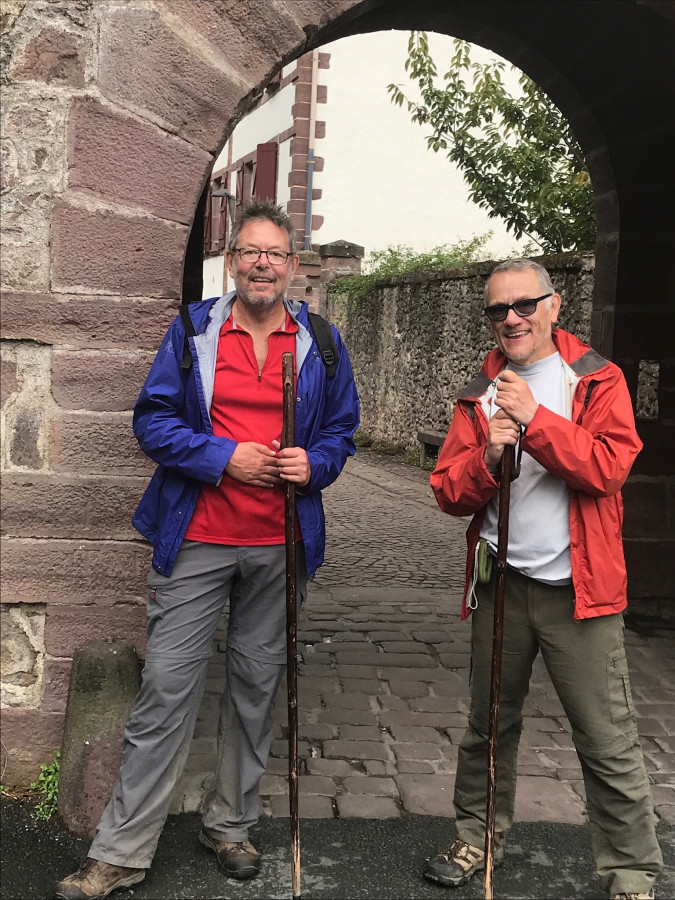 We arrive at the Pilgrims Visitor Center we’re a little disconcerted to encounter a huge line outside the door so we continue to our hotel. When we try later, we can go right in. There’s a whole row of volunteers talking to pilgrims in a variety of languages! We get a stamp for our Credencial, but not before we sit down and go over a map with the cheerful volunteer, showing all the danger spots we will need to avoid when we cross the mountains. The Catalan gentleman yesterday had assured it wasn’t going to be difficult but we can’t help getting caught up in the general feeling of nervousness and excitement that seems to pervade the whole town... 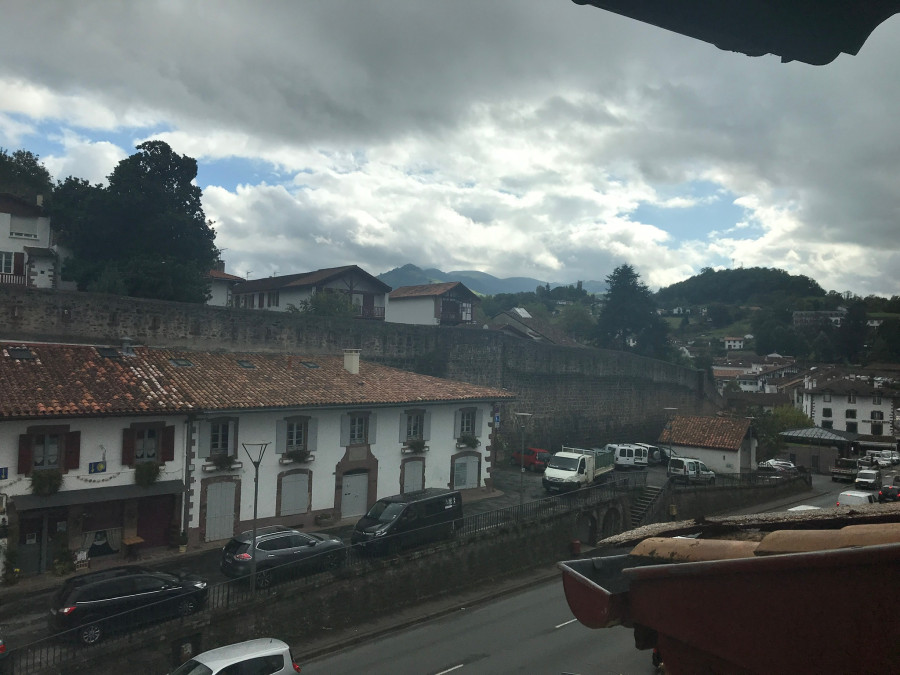